Bright mini bell peppers are stuffed with perfectly seasoned ground beef and topped with shredded cheese.  Broiled until the cheese is browned and bubbly, these little appetizers are a couple of bites of pure snack deliciousness. 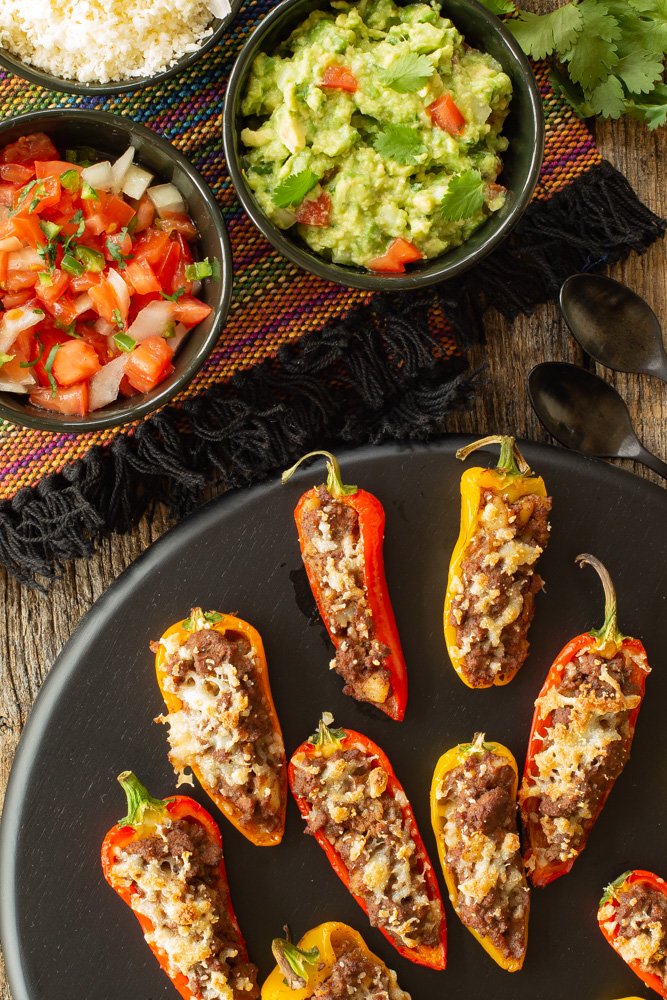 Expecting a crowd?  Picadillo Stuffed Mini Peppers are great for some game day bites and snacking.

When my son was 4 years old, he saw the uncooked turkey sitting in the kitchen sink as I was starting to cook Thanksgiving dinner.  He gave that turkey a long hard stare.  After what I thought was a delicate discussion about where food comes from, he made a decision.  No turkey for him.  That came to mean no meat for any meal.

But as he got a little older, he wavered.  There were some meals that he couldn't turn down.  There was the chicken from a local Italian restaurant.  Turkey sandwiches from a chain restaurant were always welcome.

However, his favorite nonvegetarian meal, hands down, was ground beef tacos.  There is a family-owned restaurant in our neighborhood that he just couldn't refuse.  It has a lengthy menu of delicious Mexican specialties.  No matter, it was and is the ground beef tacos he comes for.

We eat a lot of tacos, which isn't unusual.  Tacos have become a weeknight staple, Taco Tuesday anyone?  They are easily prepared, and with a number of fillings, everyone can make their own custom taco.

When I knew that my son loved ground beef tacos, I tried to replicate the picadillo that our favorite restaurant served.  I didn't want the little packet of spices.  I wanted something more authentic.  Through a little trial and error, this is the recipe that I created.

It's not just ground beef

Picadillo is a regional recipe, reflecting its community.  There are several recipes from different Latin American countries.  Considered a hash, it can include ingredients such as olives, peas, or raisins.  The recipe that I serve to my family is mimicking a Mexican version.  The ingredients I use are potatoes, tomatoes, onions, and garlic. 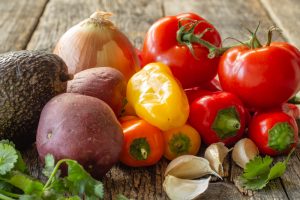 The recipe is not complicated.  Saute the potatoes until brown and the interiors are soft.  Then add the aromatic onions and garlic. 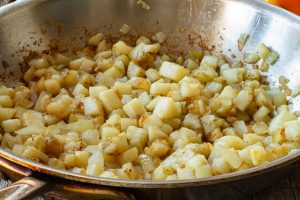 While browning the potatoes, I shred tomatoes on a box grater to remove the peel.  This is so much easier than blanching and shocking the tomatoes and then peeling them.  I remove the seeds prior to shredding.  It's just my personal preference. 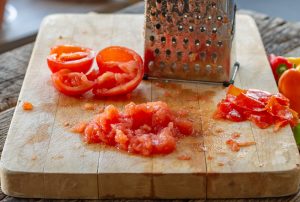 The hard part for me in creating this recipe was to get the spices right.  As I mentioned, I didn't want the packet of spices available from the grocery store.  I wanted to be authentic as possible.  I use chili powder, cumin, coriander, and oregano.  Plus a sprinkle of crushed red pepper flakes for a little kick. 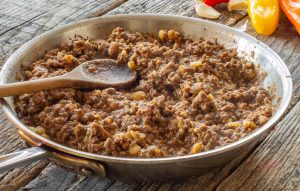 Shiny mini bell peppers.  They catch my eye in the grocery store, a bag of many colors.  Their size is what gives me ideas.  The perfect sized vessel for a filling.  You can pick up a mini stuffed pepper easily and in two or three bites, it's gone.

After cutting the pepper in half laterally, I remove the seeds and any pieces of membrane.  I usually keep the stem on for two reasons.  It looks good with the green stem still intact, like a fresh pop of color.  But the stem also acts as a stopper.  It keeps the filling from spilling out of the end.

Sprinkle some shredded cheese on top.  Some choices are chihuahua, cotija, or queso blanco.  Place the stuffed peppers in a 400-degree oven for 15-17 minutes.  Brown the cheese and roast the peppers. 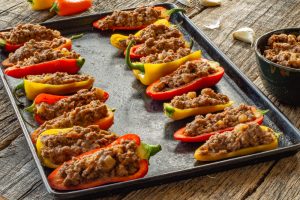 Set up a board

These Picadillo Stuffed Mini Peppers have definite game day vibes.  Set up a board of the roasted peppers, arranging all the bright colors together. 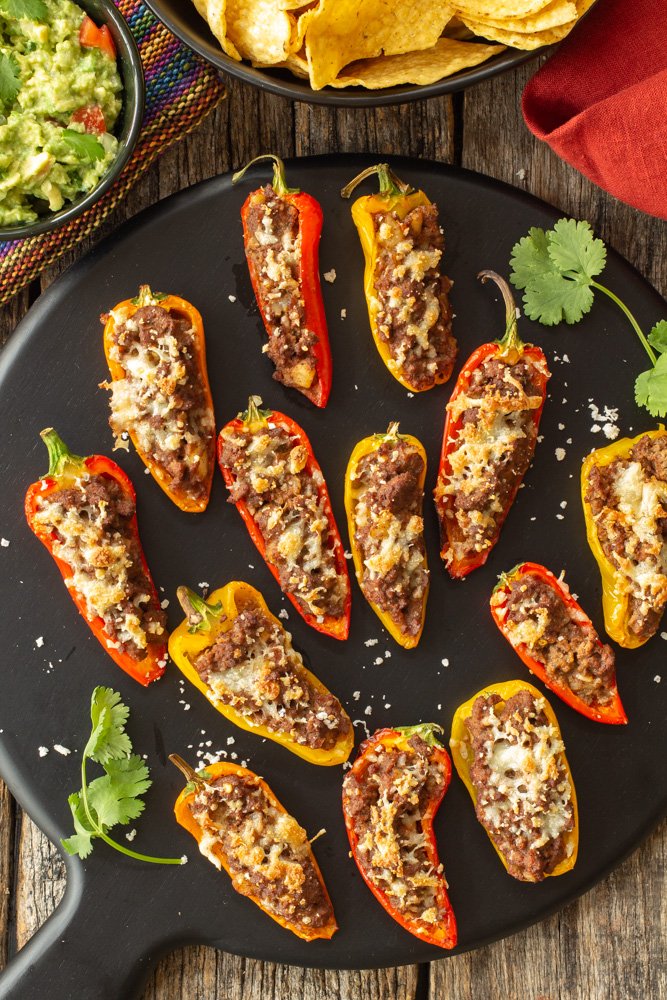 I like to add guacamole, pico de gallo, and sour cream.  But don't stop there.  Bring in the chips.  An assortment of salsas.  A tub of cold beer.  And your friends and family.  These little bites need a crowd to enjoy them. 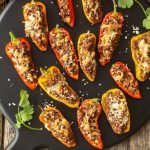 This site uses Akismet to reduce spam. Learn how your comment data is processed.

So What’s With the Name? 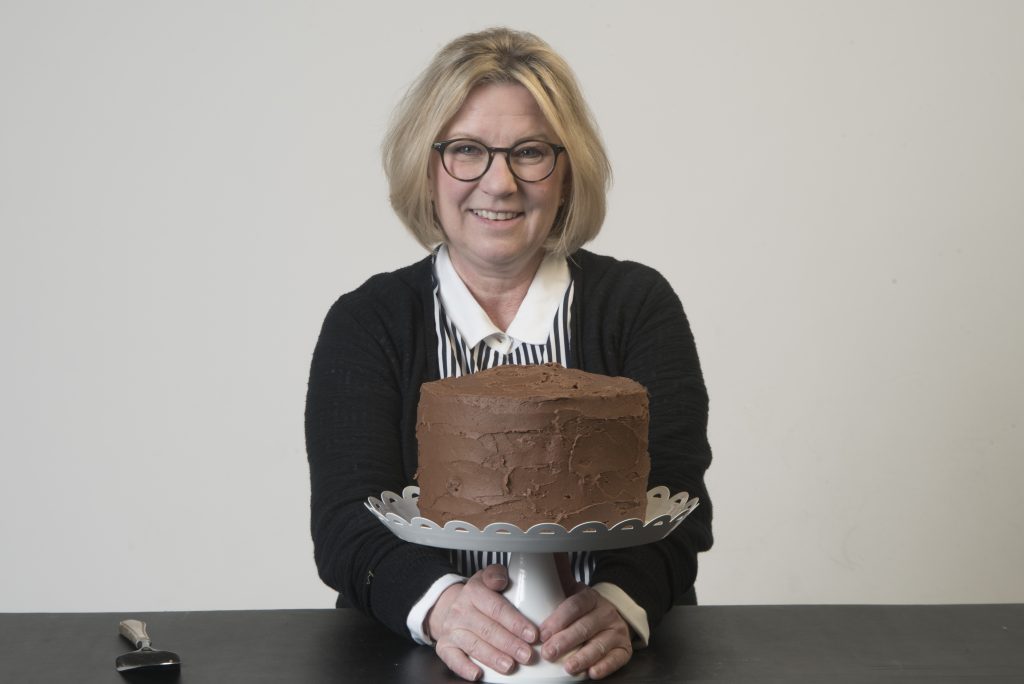 So What’s With the Name? Why would anyone want a ten-pound cake?   Siblings can be wonderful but growing up with 1 older brother and 3 younger sisters provided many opportunities for ...